So, talk of a possible deal between Plaid and Labour? I'm not sure - seems like kite-flying on Labour's behalf to me. Though, anything than pisses of extreme Brit-Nats like Huw Lewis and Leighton Andrews sounds good to me! 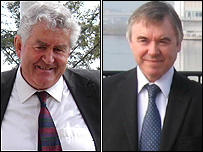 Just a few words of caution before Plaid get too excited.

Do you want to be a Junior partner with Labour in control - yes, loads of kind words from Labour but they'll still be the majority party and can vote down any (i.e. all) Plaid suggestions. Yes, and they will.

If you go in for a coalition or agreement, don't swallow any talk of report or commissions - they won't be worth the paper they're written on. Fair play to the Lib Dems on insisting on the Richard Report ... only for Labour to totally ignore it and come up with this cocked-up dog's dinner we'll have after May 3rd. So, no to reports and commissions yes to actual implementation of ideas.

Plaid - don't try and be clever and all post-nationalist. Getting some Children's Commissioner type fob or left-wing slogan implemented isn't the point of Plaid Cymru. Plaid's basic point is to move on the constitutional settlement - both in fact and also symbolism (yes, Plaid, symbolism counts too) and to promote the Welsh language and culture. Those are the core things. If Plaid doesn't deliver on them then Plaid will lose votes in 2011. And if Plaid doesn't deliver on them - nobody else will.

Question is - do Plaid trust Labour? The party which spread all kind of dirt on Welsh-nationalists and is never too low to equate support for the Welsh language with racism? Unless it's written in Rhodri Morgan's blood then I wouldn't trust a word they say.

Frankly - I'd let them hang. They've had their chance. Rhodri Morgan could have sat on the anti-Welsh language red-necks but he didn't, he let them defame good nationalists. They could have delivered on Richard but chose not to. They've had their chance and they brought Welsh politics down to the gutter - they can stay there for all I'm concerned.