So, let me get this right. Dr Ian 'Ulster says No' Paisley and Gerry ‘gun-runner’ Adams make peace in Northern Ireland and will form a government. Decades of political tribalism, ground standing and jingoism make way for the forces of common sense and good governance. Everyone's happy. Peter Hain, Tony Blair and the entire Labour establishment, even Rhodri 'just for laughs' Morgan, thinks it's a Good Idea. 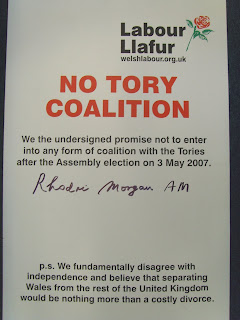 Over the water in not so glamorous Wales, Adam Price says Plaid Cymru will work with anyone to form a government except the BNP and won't serve under the Tories.

Cue, Labour’s cleless wanabee-politician Martin Eagleston trotting up outside Plaid Conference in Caernarfon asking Pricey to sign his petition to say they won't work with the Tories.

This coming from a member of the British Nationalist Labour Party in Wales who supports the war in Iraq, Trident missiles, PFI, privatisation - in fact the whole agenda which any self-respecting Tory would have supported during the last 20 years - what the hell is going on?

I'm no Tory and won't vote for them but does Labour have to create this almost racist image of the Tories? Tory policies are OK but because of class jingoism or Labour nationalism, then what, they're beyond the Pale? Paisley and Adams form a government but Bourne and Wigley is a political impossibility? Mad!

Way I see it, we can either have a Government (Labour) which implements some Tory policies but gives us this 'Aneurin Bevan was my dad' rubbish, or we may, possibly, have a Plaid government with a out of the closest, honest for the voters to see Tory party as a junior member in government. I mean, if the Labour Party really doesn’t want any Tory policies to be implemented in Wales, then their only option would be to go into coalition with a more left wing party - and that party is Plaid.

Labour have to give us this faux tantrum and anti-Tory racism because they've only got this medieval hate history left. Only 38% of the voters voted for Labour last time. Despite their rhetoric, they're the biggest party, but not the majority party in Wales. Labour are scared shitless that Plaid would actually call their bluff and get an understanding with the Tories (and the LibDems) and then what - Labour out of power in Wales for ever! Excellent!

Nick Bourne and the Welsh Tories ar pure evil, but it was OK to join George W Bush's "coalition of the willing" and invade Iraq.

Talking of which - without Tory support for the Labour leadership, we would not have invaded Iraq and we not now be signed up to replacing Trident.

What's this about "Bourne & Wigley"? Surely you mean "Bourne & Jones"?

On the other hand, if Plaid do well enough and Wigley IS elected, I expect him to become the leader of any coalition involving Plaid and the Tories.

Even though Mr Eaglestones 'stunt' probably hadn't taken place when the March issue of BARN went to press, there's a good article in it called 'Waving the bloody shirt' with reference to the practise in the US decades after the civil war

No the posting was right Bourne and Wigley, as IWJ and AFJ loose their seats, Dafydd returns from the wilderness and resumes leadership of Plaid Cymru - its one plausible scenario. Remember "Vote Eaglestone and get Wigley too".

Remember "Vote Eaglestone and get Wigley too".


Easier said than done, I'm afraid, as I find it hard to remember who you are.