Amongst all the celebrations after we beat England at rugby, it seems to have passed people's notice that Ireland beat Pakistan... at cricket! 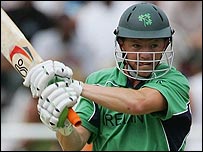 Who the hell plays cricket in Ireland? In any case, it just begs the question - where's the Welsh team? Of course, we know the answer, deep in the bowels (or up the arse) of the Englanddontmentionthewalesbit 'national' cricket team.

What is this sad psychology that it's better to be ignored as part of an England team than to have a Welsh team? Heavens, aren't there some blazer wearers who'd like a trip to the West Indies as a committee member of a Welsh national cricket team? Heavens again, we even beat England at cricket a few years ago!

Who are these people? That Mrs Davies, Burry Port, syndrome sure does run deep. As I've said before, a lot of bravado (and musical hall Welshness) when it comes to the Welsh rugby team, but for many of the Brit Nat persuasion, that's as good as it gets. We are a beaten, peasant people pretending this inferiority complex is internationalist brotherhood.