Yes, we lost to Italy. And you know what, I'm quite glad. If there's one thing worse than Wales losing at rugby it's the Welsh Brit Nat Labour smugocracy giving us their god-awful musical hall Welshness as they bask in the success of the national team. 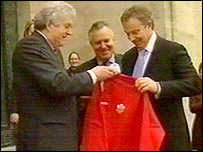 All this crap about rugby being a badge of Welsh identity and mirroring Welsh success. Bollocks! We had an excellent rugby team in the 1970s and the idiots voted No and then complained when we had 18 years of Tory rule.

We had a crap team in the 1997 and we won the Referendum. A bad rugby team is good for Wales as it means we're not going to be patronised by conversation making efforts related to this game.

All that bollocks by Morgan in that infamous article in the Guardian about the success of the national team a reflection of a confident Wales - oh for heavens sake - grow up man. All this bollocks about the national team being a great way to promote Wales and Welsh products etc. If so, why won't Morgan, Kinnock and the rest of the Welsh Labour establishment campaign for a Welsh team at the Olympics, or a Welsh cricket team at this year's World Cup?

Of course, we know the answer - it's because they're Brit Nats and Welshness starts and ends with rugby. For the Brit Nats of the Labour party, rugby isn't a badge of proud Welsh identity its just a sop. Welsh national presence starts and finishes with the Welsh rugby team.

When Welsh people want similar status for Wales in other spheres - politics, arts etc, then you'll soon see how shallow 'the proud Welsh passion' of the rugby field is. British nationalism will always win for the Brit Nats in Welsh Labour.