Ok so we didn't win, but wasn't it touching to see Prince William not knowing the words to our national anthem. Will we have to suffer this bloke as well calling himself the Prince of Wales.

As an aside - I was watching the new series on S4C, Tywysogion, (princes) with English subtitles and I hadn't realised that there was a king of all Wales at the time of Edward Confessor in England, Llywelyn ap Gruffydd, who united the country and even took land from Edward. If he hadn't been killed by a traitor in 1063 it's interesting to think how things would have turned out following William's conquest of England three years later.

However, a few seats away from prince William was Peter Hain, enjoying a game of rugby by two Balkanised teams. Of course, if Hain had his way there wouldn't be a Welsh or Irish team just one big cuddly British team of Brotherhood and Unity. Of course, on the other hand, Hain may just be a hypocrite with no principles. 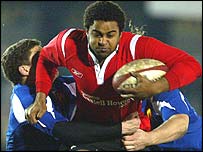 The one great thing from the game was seeing Aled Brew wear the red jersey. No doubt it's further confirmation that the CRE are right and that independence for Wales would mean racial tension here. Bollocks!

The existence of a national rugby team, like independence, gives Wales the opportunity to build a civic nationality. Aled Brew, a black Welsh speaking proud Welshman, with a Welsh first name, is living testament of this blindingly obvious truth. It's the CRE and Hain who want to keep Welsh identity an ethnic identity not Welsh nationalists!