How sad are we as a nation?

Last week we saw WRU bigwigs cooing over the fact that Prince William (the President of the English Football Association) had officially started his role as Vice Royal Patron to the Welsh Rugby Union (his Mum being the Royal Patron) by attending the Six Nations match between Wales and Ireland.

The most servile of the lot was Chairman of the WRU David Pickering (who was seen sucking up to Princess Anne at the Scotland v Wales game today) who said at the time of William's appointment: 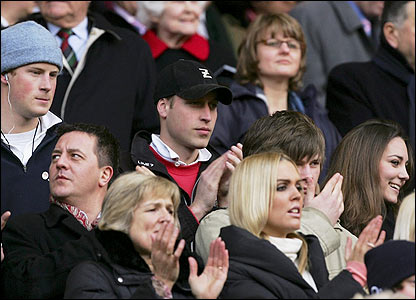 "I am delighted that Prince William has agreed to become our Vice Royal Patron... He has particular qualities when it comes to interacting with young people and I am sure he will prove inspirational in his new role within Welsh rugby. We're all thrilled."

I'm sure that William inspired many young people in Wales to get involved in Welsh rugby when they saw him supporting England in Twickers today instead of supporting our boys in the Scottish match. But hey, that's exactly where he should be of course, given the fact that he is English!

How pathetic are we as a nation that the Patron to our National Sport isn't even Welsh? Haven't we got enough confidence in our own nation, and our own people?

What next, a Kenyan Secretary of State for Wales?!?