Congratulations to Kosovo, or rather Kosova, on gaining statehood and voting for independence on Sunday. 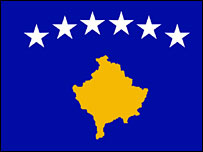 There's a lot of doomsayers about the future of the state the usual 'economically unviable' and, yes, at the moment it's in a bit of a mess. But, it's more economically viable than an independent Palestine, and I've yet to meet anyone that says Palestine shouldn't gain independence because of its economic inviability!

In fact, statehood will be a great help towards the economic development of Kosovo, bringing it out of a legal limbo and forcing the Albanians to sort themselves out and stop blaming others. It won't be Sweden in five years time, but then, who would have thought the other East European would have travelled so far in 15 years. Well we would have as Welsh nationalists! We've always known 'you can't make it on your own [sic.]' to be prejudice by proxy. 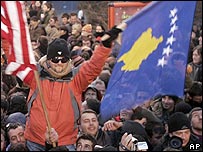 In 2012 Kosova will be represented at the London Olympics, raising the profile of her nation and her self-respect, and where will Wales be, cap in hand asking the Mother of Parliaments for a few more crumbs, no doubt with the Brit Nats telling us how lucky we are!

In name only, alas. The economy has been privatised under occupation, meaning a loss of economic sovereignty from the get-go. As for politics, won't the EU be running the show - is this not a Bosnia-type situation? Ashdown was made colonial governor - able to suspend elected officials and impose laws by decree.

Jubilant celebrators waved US and EU flags - something very different from independence, I am afraid.

It's only just over half the size of Wales, so if they can do it...

This blog is very interesting, i liked because show many good new ideas. I must to say it catched my attention. I like to know about everything and i am fan of the watches. I prefer to see several style before to buy one.
_______________
buy viagra