Just a quick posting following on from the posting below on Super Brit Nat's problem with Welsh having status in its own country . 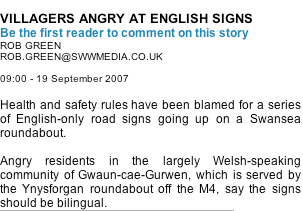 It's also to lay to rest any difficulty people in general may have with bilingual sings, especially some rather dull drivers in the Swansea area who aren't able to read Welsh (after living in Wales all their lives! Yes, they have a God-given right to speak just English and never ever to be contaminated by Welsh).

The Assembly commissioned £53k report (yes, they could have built a children's hospital and a new school for that) to find out the effects of bilingual signage. And just to make sure it was impartial, the research was undertaken by people in that Welsh-speaking bastion - Leeds.

The conclusion, well, people really aren't as thick as some Labour Brit Nat members think they are. Just think... they'll have to find another fig-leaf to cover their views.

A new Primary School would cost about £4m, whilst the Children's Hospital is two or three times that cost.

Peter - i don't think the author was saying the report costs the same as a school or hispital. I think its a sarcastic reference to the way all debates about the Welsh language (and many issues in Wales) seems to have to stand up against money which could have been spent on 'schoolsandhospitals'.

it's a dig at the perceived waste of money which some people accuse spending on Welsh things to be. 'Wasting' money to see if Welsh was a 'waste' of money so to say.

And incidentally, when are Welsh place-names going to be corrected? Why is St Tathan's still called St Athan's? Why is the name Lantwit Major still retained? When will dignity and respect be delivered to the people of Wales, or must they endure facetious renderings of their honoured place-names in perpetuity?

http://www.nomurderacademyatstathans.com/search?q=norwegian yet we are begging them to come to Wales and teach our children! What will they tech them!

Private military corporations become a way [for government officials] to distance themselves and create `plausible deniability.'

Do we really ANY sort of jobs?

The new military academy will train personnel from all over the world.Aside from the threat posed by having nuclear weapons on our soil, the conventional weapons involved at St Athans raise serious moral issues .Between 2001 and 2004 the Ministry of Defence provided military training for over 12,000 personnel from 137 countries, many with poor human rights records. Matrix is already travelling the world promoting itself at arms fairs, drumming up business for St. Athens.

All of this raises the prospect of Wales being used as a training ground for any corrupt dictator who happens to have a million pounds to spare.Unions representing military training staff are threatening strike action over the privatisation of the military.

Sign our petition against the St Athan Murder Academy

Introductory booklet explaining why the Academy is a bad idea (welsh version, pdf)

Introductory booklet explaining why the academy is a bad idea (English version, pdf)

I wonder what will ahppen when the Polish signs arrive.
This is Wales not England -the signs should be bi-lingual
I am a monoglot Welsh woman but would not be happy if this trend continues