I was pleasantly surprised to hear that Sir Emyr Jones Parry was chosen to lead the convention to prepare the way for a referendum on further power to the Assembly. 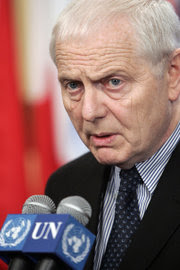 I don't know anything much about him or his political leanings. They say he's Welsh-speaking, but my guess (and I could be wrong) is that after a career in London and abroad his Welsh must be a little rusty. Yes, Plaid and Labour should have had the good grace to consult the Tories and LibDems, but it still seemed a good choice and one which gave status to an important process.

But then, I'm not anti-Welsh language. Funny how Brit Nat Don Touhig called Emyr JP a member of the 'crachach' - never heard him say that about Lord Richard - but then Richard was a well-known Labour supporter, and more importantly, couldn't speak Welsh.

Funny how Crachach seems to be the only Welsh word Brit Nats know. It verges on racism to my mind. Most countries would have been glad to have a former UK ambassador fronting a debate on devolution. I dare say, were Emyr JP not a Welsh speaker, and didn't have such a Welshie name, then Touhig would have no problem. I dare say, coming from Carmarthenshire, aged 60 old, then Emyr JP didn't have much choice about being able to speak Welsh or not, it wasn't his choice; same as it's not someone's choice if they're born black or not. I suppose he could redeem himself by unlearning Welsh and giving himself an English name - a sort of linguistic Michael Jackson with the Uncle Tom cringe like so many past Labour MPs have done.

Crachach - it's just sheep dog whistling for 'Welsh-speaker', same as 'Muslim' can be used for 'Paki' isn't it?

Terrible thing eh - Welsh Assembly, in Welsh capital chooses Welsh person, who knows Welsh history and culture (in both languages) to front open debate about that referendum which would give Wales more power and which both governing Welsh parties have signed up to support. Yes, you can be too Welsh in Wales and if you don't like people who are too Welsh, then you join the Labour party... and Labour can't work out why their vote collapsed among Welsh-speakers in the May election?

Terrible thing eh? Labour MPs, all bar a few, will be totally forgotten in a few years time, can't bare to see the power slip from their hands. Wales is changing and the Brit Nats can't take it.

They say he's Welsh-speaking, but my guess (and I could be wrong) is that after a career in London and abroad his Welsh must be a little rusty.

I suspect that Don Touhig is attempting to create controversy where there is none. By choosing a person who is nearer to Welsh political life the appointment would possibly stir up controversy and division. This is why Don Touhig is upset with the appointment as it cannot easily be opposed or questioned as Sir Emyr Jones Parry
is unquestionably unbiased and above reproach.

This is good news. I am please to see that greater self-government has not been put on the back burner. (I blogged on this on wednesday, btw: http://charliemarks.wordpress.com/2007/10/24/the-convention-on-welsh-self-government-and-fallout-from-the-snp-reforms/)

I note that the idea of a convention was said to have originated from Welsh Labour. Not sure if it was in good faith, and Parry is something of an Establishment figure, but still... Events in Scotland will have a bigger impact than those Welsh Labour MPs who fear for their jobs.

Lord Richards was a good chap as well, and did an excellent job, but was ignored. What makes us think this time it will be different?