Yes, England are going home after losing to Portugal on penalties in the World Cup. In a way I feel sorry for the players (Except for idiot Rooney) and the fans. Sven's a bloody useless manager. With all those players to choose from England should have been in the semis without any problem. 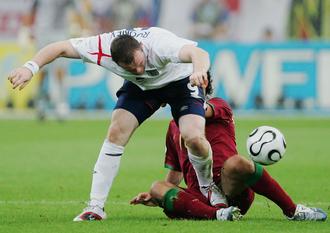 I'm also sorry in another way, because with every win England were becoming less British and more English - and that's something I welcome.

My only problem with the whole affair, and the Edward the Conqueror flags flying about Wales, is that it's a sign of a nation that has imposed its language on our country and a nation that has consistently failed, as a national and linguistic community, to integrate into Welsh-speaking Wales.

That's why I applaud the brave (and humorous) members of Cymuned who made their feelings felt at a protest event in Abersoch last Saturday. Of course the usually crap about being 'anti-English' was thrown at them., but there are many English people who are members of Cymuned - so that's rubbish.

As I said it's a political thing not a personal or racial one. Give us the means to integrate the English into Welsh society and make them learn the Welsh language (as Gordon Brown and Brit Nat Labour insist happens to people in respect of the English language and 'British' culture) and there'd be no problem.

I think you're flogging a dead horse there mate, honestly most of the English guys I know can't even spoke proper English, never mind learning another language ;O)Try walking around London, English is the minority language now.
We now have the English flag back, the St George cross, what annoys me is that the Welsh is not represented in the UK/British flag. Why? It's now 2006, battles and wars are long over, the Welsh have their own national anthem, parliament/assembly and language why no representation in the Union jack? It would look nice with a dragon or leek in the middle! Better yet, just get rid of that flag all together.

Look to your Scottish cousins see the rise in the independence up there. go to our-scotland.org. Britain is dying on its feet. Go Wales, stand up and be a nation again, finish what Llewellyn the great and Glyndwyr couldn't. Agus Alba Gu Brath!!!! Scotland forever.