Is this some kind of joke? On the day Heritage Minister makes announces that the Welsh Government wish to legislate on the Welsh language, up pop the usual suspects (Labour's Paul Murphy and some Chamber of Commerce/CBI bloke) saying that we need to be mindful of the business sector. 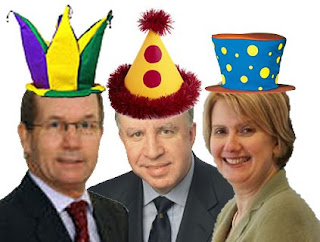 Is Murphy totally shameless? The Labour Government - his government - has chucked £400bn down the drain because of their incompetence and obsession with the great British 'City' is telling us we can't have equal rights for Welsh and English in our own bloody country, in case it affects adversely on the economy?!

Why doesn't Alun Ffred tell him to take a running jump and put his own financial house in order? The UK and Welsh economy is going down the toilet not because WAG believe that large companies which get £200k out of our money should give some service to some of those tax payers; it's going down the pan because of the British nationalists infatuation with the City. This infatuation is built because British nationalism needs a bloated City to prop up it's own self-worth.

And then the CBI bloke comes out with the usual line. This is the same CBI which miserably failed to predict the financial crisis and told us the minimum wage would bring on a plague of locusts? Why do the BBC still insist on interviewing these people - they're totally discredited. They're just a pressure group in smart suits. Why not ask Cymdeithas yr Iaith Gymraeg their view on the economy - it could hardly have been worse than the CBI... nor Labour's.

Ann Beynon of BT would 'prefer Welsh language services to remain voluntary.' Ann, I'd prefer taxes were voluntary too - but hey, life's a bitch eh? You've got a license to print money from the state you can now pay that state back for that right.

Murphy's Labour Party and the CBI are two totally discredited bodies in search of a role. They should spend more time sorting out the economy, and stop lecturing a democratically elected Welsh government which believes the future of the Welsh language should be in the hands of a Welsh government.

It's time Alun Ffred told them a few home truths and spoke in plain English the next time they try and 'advise' us.

As native-born English speaker, living in London, I am so glad that, at least potentially, the Welsh language will gain equal status with English, in Wales.

As the "International Year of Languages" comes to an end on 21st February, you may be interested in the contribution, made by the World Esperanto Association, to UNESCO's campaign for the protection of endangered languages.

The following declaration was made in favour of Esperanto, by UNESCO at its Paris HQ in December 2008. http://portal.unesco.org/culture/en/ev.php-URL_ID=38420&URL_DO=DO_PRINTPAGE&URL_SECTION=201.html

The commitment to the campaign to save endangered languages was made, by the World Esperanto Association at the United Nations' Geneva HQ in September.
http://uk.youtube.com/watch?v=eR7vD9kChBA&feature=related or http://www.lernu.net

Thanks for posting I enjoy reading it.I have cowboy boot to sell if you are interested just simple drop a click.