Evo Morales, the President of Bolivia is making history. Not only taking control of the country's natural wealth which goes down well with the Brit left wing, but is also proving that the battle for economic control is the same as the one for dignity of marginalised languages and cultures... something some of our British nationalist friends in the Labour party conveniently forget. 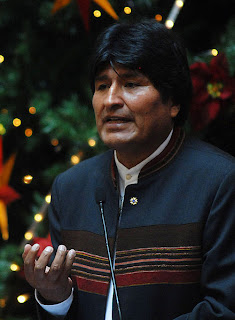 My Spanish is pretty ropey, but from what I gather from this news item, the fantastic President has opened 3 university sites in Bolivia teaching in three of the states languages; Guarani, Quecha (language of the Incas) and Aymara (his people's language). This battle to win rights, dignity and normalising marginalised languages is the same as the fight in Wales or Brittany for Welsh and Breton education.

What serendipity. After denying the need or ability to develop a Coleg Ffederal, funny that Labour, with Plaid in government - and keeping to the One Wales pact, now goes about actually delivering a gear change in university education through Welsh with the delivery of the Coleg Ffederal Cymraeg. Evo Morales is doing the same in Bolivia. The Welsh nationalist project is a world-wide project not the spiteful one so long propagated by some Labour members.
And the proof, well, this item on the www.eblul.org site (the old Eurolang.net site) mentions that the Bolivian Ambassador will visit Machynlleth on 14 August. Why? Well to learn and hear from us Welsh about our struggle for linguistic rights and our efforts to normalise our language in our own country.

Fantastic! Funny, I don't think our Brit Nats friends like the Kinnocks of this world (and some AMs) will have much to contribute to that discussion. No doubt, were they in Bolivia they'd be doom-saying that 'we can't afford this', 'it's divisive', 'should be spent on schools (Spanish/English speaking of course) and hospitals'.
British Labourism has run it's course. It has misread the cultural change which is sweeping across the world. Labourism is a cult of the discredited modernist 20th century a Darwinism of culture and languages. Good riddance to it. It served us badly. Welcome to the new world where Wales talks like friends to Bolivians and Welsh is an asset not a problem. Viva La Revolución - in all our languages! May the conquistadors mentality of Bolivia and British nationalism in Wales perish!

With the continuous monitoring of the country's wealth, The President of Bolivia will ensure the implementation of the trickle down effect. A positive step, taken by the President. Bravo!