Change is afoot in Greenland. In a national election held to elect a government as it enters a new enhanced form of self-government within Denmark on 21 June, the voters have gone for a left-of-centre nationalist party Inuit Ataqatigiit, a sort of Greenlandic Plaid Cymru . 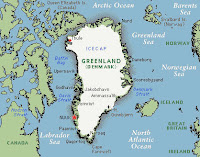 This is good news. The voters in Greenland have seen that after 30 years of rule by the more cautious devolution party, they want a new party for a new constitutional set-up... will the same be true of Wales? Lets hope so.

BNW is all for independence for Greenland but as we've written before, we believe that the Danish connection is an important one as trilingualism - Greenlandic, Danish and English is better for a small linguistic community like Greenlandic than bilingualism where the second language, English, is such a strong and potentially fatal one for the smaller language. From the Greenlandic point of view, keeping Danish as a second language would enhance Greenland's independence not undermine it. The lesson from Nunavut, the semi-autonomous Inuit Canadian province next door confirms this. For small linguistic communities like Greenlandic or Welsh isn't that speaking another language is a threat but that speaking only one other language is a threat - it's best for us to be trilingual not bilingual.

It seems, that now the Greenlandic language and community is the dominant one in terms of number and confidence that Danish is no longer a threat. There's a lot to be said then for keeping the Danish connection therefore... a connection which stretches back centuries and is a window on a wider (and quite appealing) Scandinavian culture.

Maybe Greenland could have independence within a Danish commonwealth along with the Faroe Islands - another nation, were it governed by a more powerful linguistic community, English in Scotland or the UK for instance, would have seen it's language lost and economy weaker - see the Shetland islands as a comparison.

In any case - Greenland leads the way where Wales will follow!

This is really nice blog.wonderful work!!!!