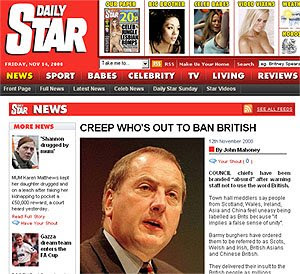 It is sad, but perhaps not all that surprising, to see Mohammed Tufail, Director of Race Equality First, lending his support to a particularly poisonous article by the Daily Star on Wednesday. The Star, in full frothingly self-righteous Brit Nat mode, had decided to scrape the dregs in a hate-filled attack on Ron Davies for having the temerity to suggest that some Welsh people prefer not to be called British.

Mohammed Tufail, in a soundbite which will have delighted the attack dogs at the Star, claimed that he had 'not come across any Welsh people who don't want to be referred to as British.' Surely Race Equality First can see that when their soundbites are being used to support vicious attacks against individuals who want to express their own identity, they are not doing a very good job of promoting the tolerance necessary for the equality agenda to succeed?

Well, here's a first for you, Mohammed - I'm a Welsh person who doesn't want to be referred to as British. Is that such a dreadful sin? Don't you want to see a fair society where individuals can be proud of their identity even if it's different to the majority of the population? When you say that you've not met any Welsh people who don't want to be referred to as British, it raises some interesting questions. Do you quiz every Welsh person you meet about how they want to be identified? Or do you think it is fair and reasonable for you to imply that people like me don't exist, shouldn't exist, and should shut up if we do happen to exist?

Perhaps, Mohammed, before you make sweeping pronouncements about the people of Wales, you should consider taking part in some of the social networks that are letting people express themselves more than ever before. How about opening an account with Facebook? If you do, you could join the group 'Welsh not British' - which has almost 3000 members. Or, like David Davies, you might find it safer, more British, more acceptable, to join the Welsh conservatives - they've only got 37 supporters as I write this, so they might be grateful for a few more!

Come on, Mohammed - have you got the personal integrity to answer some of these questions?

Dear reader - if you, like me, are a Welsh person who would rather not be referred to as British, why not let Mohammed Tufail know that you do, in fact, exist? You can find his email address on the Race Equality First website. But don't stoop to the level of the Daily Star - just let him know, politely, that you exist, and that you would be grateful if he would not deny your existence, deny your identity, and deny your right not to be targeted by the kind of hatred the Daily Star is so quick to promote.