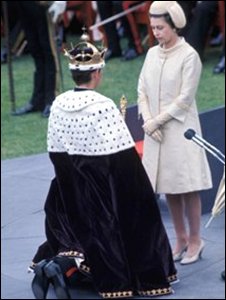 Dafydd El's comments on the non-need of an Investiture for the (so-called) Prince of Wales is one of the most sensible and courageous things he's said in a while. The Investiture was used by George Thomas in 1969 to further his own ego and to keep Welsh identity in it's place i.e. subservient to the imperial centre.

However, Dafydd Elis Thomas's suggestion that people don't like 'stunts' or 'gimmicks' isn't quite true. Welsh people love a pageant and pomp - from the Gorsedd of the Bards at the Eisteddfod to a rugby international, the St David's Day annual parade or the recent Olympic celebrations outside the Senedd.

And if Welsh people can't release that need to celebrate, dress up, recognise nationality and other people's success within a Welsh context they'll look for it within an English or British one.
So, 'No' to another sycophantic, forelock tugging Investiture but 'Yes' to pageant and ceremony on Welsh terms, celebrating Welsh achievements. Being Welsh doesn't mean wearing woolsack.

Totally agree and it would be nice for a holiday for Wales.

If you'd like to dig the dirt on the Biscuit Kings feudal Duchy then I recommend this website.

The fully-referenced Duchy of Cornwall website http://duchyofcornwall.eu/ summarises the most recent work from leading Cornish historian and human rights campaigner John Angarrack. Much is revealed by this research based on primary sources, including how Cornwall's unique history has been re-written by officialdom and the impact this has on the Cornish identity.

While I'm here I'll bring to your attention the new campaign by Cornwall 2000 to get the Cornish and our culture some legal recognition within the UK and EU. The purpose of the fund is to pay much of the costs involved in pursuing a legal action against the UK Government. The action is necessary after government’s constant, dogmatic and wholly irrational, refusal to include the Cornish within an international treaty designed to, among other things, introduce educational pluralism in their traditional homeland and thus bring to an end the forced assimilation of the Cornish people. That treaty is the Council of Europe Framework Convention for the Protection of National Minorities. Please study this short summary of the situation and help us take the steps necessary to secure, among other things, equal educational opportunity for all pupils in Cornish schools.

The website for the fund can be found here: http://www.cornishfightingfund.org/index.php

Please help and please do feel free to forward this e-mail to any you think might be interested.

Another good dosage of common sense Nick..
What is also needed is SOMEONE to stick a recorder into "Alan Wilson's" head and extract his complete memory bank..He is hated by many contempory Historians and Politicians and for that alone there should be the incentive to work hard to establish/regain our Welsh Heritage

"The final disaster for British Ancient history came in AD 1714 when the English imported the German Hanoverian family of the elector of Hanover as their puppet kings and Queens. From this moment onwards everything historical had to be both politically and religiously redesigned into a suitably acceptable form to promote the new Germanism in England in particular and Britain as a whole. Few people read the publication of the 19th century deliberately designed to popularise the German ideals.

The one-quarter Welsh King Henry VII of England had a sister who married a Scots King, and later a descendant of this marriage married an Elector of Hanover. So when the throne of England passed from the Tudors to the Scots Stuarts, and there was a problem on there being no heirs to the throne from Queen Anne and from Queen Mary and William of Orange, the Parliament had a bright idea and invited the German George, the Elector of Hanover, to be King of England."