When British Nationalist Labour members are scared - they scare the electorate. How else can you explain the pathetic remarks by senior Scottish Labour MPs at the Labour Scottish Conference? It just proves that they've lost the intellectual and economic debate, and have to resort to scaring people. 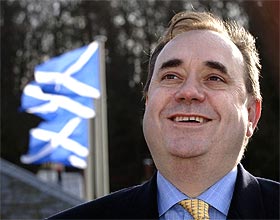 Are they seriously saying that Scottish people living in England would be treated differently from Irish people living there, or that they would have less rights than Polish plumbers, if Scotland was to become independent?

Can John Reid name one EU state that has passport controls at its borders? Is John Reid in favour of creating an European Superstate (and get rid of the UK) so that we can tackle the environment?

International terror (yes, go on John, scare the granny) - there's actually an argument that more states with more border controls (yes, even at Gretna Green) could stem international terrorism - but then he's against that as well.

No control on mass migration? What's John Reid trying to say - vote independence and thousands of third world scum will swamp Scotland? - that seems to be the dog whistle to me!

Douglas Alexander waffles about 'teaching Cantonese not Culloden'. What, like schools in England, where the teaching of modern languages has decreased under Labour?

Don't the Scots find the implication that an independent Scotland can't be fit enough to sort out basic things like education on their own and that they'd revert to some music hall parody of themselves insulting? Sounds so very much like the nonsense peddled by the British Nationalist Labour Party in Wales to me.

As usual, Salmond is right. Labour needs Scotland for the egos of its own Scottish Labour politicians.

Interesting. They've been having this debate over on Comment is Free - though as ever it tends to go around in circles.

I've linked to you in my sidebar:
http://blamerbellbriefs.blogspot.com

I'd be grateful if you'd put a link to my site here too!

"Alex Samon yesterday promised that an independent Scotland would work with England and Ireland in a new partnership of the Isles."

Will Wales be out of the loop then? >:U