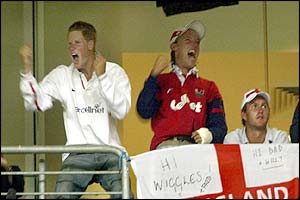 Prince William - the Jac-Saes, who's about as un-Welsh and more importantly as disinterested in Welsh culture as a British citizen can be - has been awarded some cocked-up post with the WRU.

It's all so pathetic. Grown men, palms-sweating as they imagine themselves climbing another rung to get their OBE for services to arse-licking of the British establishment. God, it all just reminds my why I hate the WRU!

No personal offence William (and yes, I do mean that) but I hope you get thoroughly booed when you do bother to patronise Welsh rugby. And please, do patronise the boyos - they won't even notice, and if they do, they won't say anything, serfs don't.

British nationalism - it's so demeaning!

PS. If you're wondering about the picture, that's Prince Harry, the other son of the Prince of Wales (and William's brother) celebrating England's victory over WALES at the 2003 World Cup!! There's more pictures on princeofwales.gov.uk

Here's a few letters that appeared in today's Western Mail:

SIR – So, yet again the WRU looks across the border for patronage, in the form of a certain English William. Whether or not you agree with his appointment, the questions loyal Welsh rugby supporters – indeed, Welsh citizens – should be asking are:

Can the WRU explain the need for a vice-patron, or even a patron, from outside Wales?
Who made the decision to ask William?
Were any other people considered?
Why weren’t Welsh rugby supporters asked for their opinion?
Will William openly support Wales against England?
Will he learn the Welsh National Anthem?

It really is high time we grew up as a nation and democratically appointed our own people to represent our major institutions. Surely, there is an ex-Welsh rugby international or some other well-known Welsh person out there with a son called William.

SIR – I see that one of the many royal hangers-on has been appointed vice-patron of the WRU. I have two questions.

Was this because throughout the whole of Wales not one suitable Welsh candidate could be found?
Or was it because the WRU leadership is riddled with forelock-touchers who pray nightly that their pathetic sycophancy will soon be rewarded – as it most surely will be – with gongs galore?

It’s bad enough that Welsh rugby players are forced to wear the badge of our supposed conquerors upon their shirts.