And it is a very good day... for British Nationalism 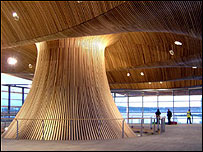 Looks like the Brit Nats won in the end. The new Government of Wales Bill gives no real new power to the Assembly, the number of AMs to be less than most county councils, a spiteful Ukrainian election policy, a two thirds vote of members needed just to ask for a referendum on more power, and then is it two or three hurdles in Westminster just to be able to ban smoking or do something useful or exciting. Heavens, life's too short for politics eh?

Don't know why Dafydd El is so pleased the place is going to be called a 'senedd'. It's just the usual sop to stupid Welsh people to make the humiliation feel a little better.

But the really good trick by the Labour Brit Nats? The Assembly, the Labour Assembly, is so useless that nobody would want more power for it. Excellent. Have a crap government and then you kill off any appetite for more.

And the other good trick by the Brit Nats? Throw in some spiteful bits in - like the Ukrainian election thing and other 'feel-bad' policies and unlike the 1997 Referendum, who in their right minds are going to form a broad coalition with Labour? Who would want to work with such a spiteful party? They'll only shaft you - like they did to the Richard Report.

Ron was wrong. Devolution was an event. British Nationalism is alive and well in the Wales Labour Party.