I'm aware that quite a lot of the visitors to this site come from outside Wales.

The last posting showed the little-known ideological roots of the contempt of the 'big nation' left-wing chauvinism of people like Eric Hobsbawm and numerous communist and socialist politicians and writers towards the many Bretons, Basques and Gaels (and Welsh) who visit this site (see video clip in previous posting). 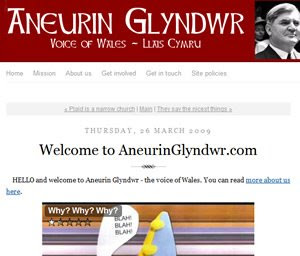 As one person said; they've discarded their ideology, they are bereft of ideas, they have no vision and they're left with being a tribal, childish, spiteful party which would rather hamper self-government for Wales and so be ruled by the Westminster Tories whom they claim to hate so much. Compare this childish website and video (if you can bare to watch it all - I couldn't! - just too embarrassing) with Plaid Cymru's intelligent www.WalesCan.com laying the argument for Wales to become a normal independent nation state.

Plaid = grown-up party
Labour = childish
I really think that this is the beginning of the end of British nationalist project which was Welsh Labour. It's not over yet. But when a once mighty political party has this to offer, and when Peter Hain thinks that this is "Obama moment for Welsh Labour" you know they're on their last legs. A party can't last for too long without some intellectual belief and project.

Needless to say, this video has clogged the bloggersphere and websites in Wales. Here are some of the latest links:

And here are a few quotes:

"Check it out, if only for a laugh. It's cringeworthy. It's so obvious that they're angry with Plaid for coming up with the idea of Walescan and feel threatened by it. Everything about it is wrong." - Heledd Fychan

"Aneurin Glyndwr - not even funny. What a complete joke. Not worth a meagre link even." - Rhodri ap Dyfrig
"If Aneurin Glyndwr is the best Labour can offer in terms of modern campaigning in Wales then bring on the General Election." - Geraint Day

"Still can't quite believe that 'Aneurin Glyndwr' is an official Labour site. It's a set up job surely?" - Cynical Dragon

"At the moment aneuringlyndwr.com is the internet equivalent of watching your dad dance at a disco." - Peter Black

"Anuerin Glyndwr - the new web site - its supposed to be satirical. It's pathetic." - Valleys Mam

And the 'student' behind this project? None other than Leighton Andrews' researcher, and Welsh Assembly pin-up David Taylor. According to Martin Shipron of the Western Mail, he is "feared for his skills on the internet, being seen as one of the most talented disciples of Adrian McMenamin". Internet Skills? Talented? If this is the best Labour have to offer, God help them!

We have blooged about David before, back in 2005. View posts below:

After seeing your Blog I can say that it’s very nice and its content is also very nice. WoW Gold is the topic which I like most to write about.I fact Iwas looking for information regarding Wow Gold and I reached in your blog. But very nice Blog.I liked it.