As one comment on Syniadau'r blog put it, it seems the Catalans will have to start killing people if they want their cause to be covered by the BBC or the 'Welsh' press. 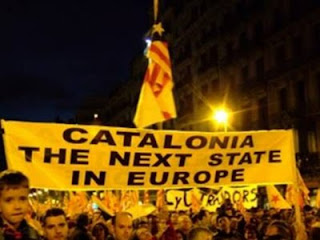 Many of you may know that because the Spanish Constitution (which can't be changed because it was given by God on Mount Sinai) doesn't allow a democratic referendum on independence for Catalonia or the Basque Country. The Catalans have side-stepped the band and are holding a series of referenda on 13 December on the subject in some 150 local councils.

This is big news. But, not big enough for the BBC or the Western Mail. Vaughan Roderick gave is a quick mensh a few weeks ago and there was a piece in Golwg360 as Jill Evans Plaid MEP will be in Catalonia as an observer. Other news which is covered in BBC Europe online include a hunger strike by a Western Saraha dissident (another Spanish colony) and conseiderations by Turkey to ban the pro-Kurdish DTP party . So, the subject of minority righst, or independence movements isn't a problem for the press, it's just that, well, by not killing people or threatening to kill people or not being attacked by tanks or water canons, the Catalan cause isn't deemed newsworthy.

However the big story is that Spain, unlike the UK, which, would in theory at least, allow a referendum on independence for Scotland, Northern Ireland or Wales won't allow a similar democratic vote for the constituent nations of their state. The Catalans, like the Basques and Galicians, predate the Spanish state. Catalonia is only a part of Spain because they lost a war of independence in the early 18C - a cause which Westminster supported.

Spain isn't Turkey, but denying a referendum on independence for a European nation within the EU, a nation which has not used violence or intimination is news. Is Spain the kind of EU member state we want to have?

As a Catalan who wants the independence of its nation I thank your understanding of our situation. On the other hand, I often watch BBC World news and it's true, it would come to a nice surprise if they happened to say something abouth these votes for independence.

Sorry, Nicholas, but it does not look like your comments would pass any objectivity test. The Spanish Constitution was not given by God, it was given by some politicians completely dettached from reality. It is changeable and many people, not only Catalans, Basques or Galicians, would be more than happy to change. Another point: Western Sahara is not a Spanish colony. It is a Moroccan colony. And Catalonia does not seem like a colony to anyone with more than two neurons in the brain. How many colonies enjoy bigger living standards than their supposed "colonial state"? The case of Catalonia is the case of powerful political lobbies aiming to have international power recognition while monopolizing a very lucrative market of 46 million people. That is, in the purest neoliberal philosophy: increasing their own economic (those politicians are the highest paid in Spain) and political power and increasing social and economic inequalities. Shame on you, coming from one of the poorest countries in the UK, to support such initiatives.

I believe news agencies and channels all need to be completely unbiased and non-prejudiced in reporting the news. But some bias always creeps in.

it would come to a nice surprise if they happened to say something about these votes for independence. Nice talk or chat.

I believe news agencies and channels all need to be completely unbiased and non-prejudiced in reporting the news. But some bias always creeps in. well any question ask me via chat